Another day – another excursion! But with today’s program not starting until mid-day, we make additional plans for the morning: watching the sunrise (although the beach faces west) and beach massage!

At noon, Team Same Same and Team Belgium meets up in the lobby to pile into 3 vans (there are about 30 of us now!) and get to Ao Por Pier, about 25 minutes from the hotel, and located on the east shore of the island, facing Phang-Nga Bay.

Once at the pier, we wait for the downpour which just started as we got there to let off, before hopping onto a small transporter bus which takes us to the end of the pier, where we board the John Gray boat. Welcoming us on our private boat today: John Gray himself! What a treat …

We ship out north for about an hour, before reaching Ao Phang-nga National Park and the first island, Krasom. This island holds several caves, leading to lagoons in the middle. Kirk and I get into the canoe with Noi, our guide and paddler. He quickly gets us to the entrance of Bat Cave, the first cave of the day. With low tide providing a large entrance to the cave, it’s easy to get in, yet gets dark quickly, as the cave is long and windy. But Noi brought a flashlight for us, and points out the sparkling stalactites, tall ceilings and hundreds and hundreds of bats hanging from them! Soon enough we reach the lagoon in the inside of the island, where we spend a while exploring the sights, including the monkeys jumping through the trees way high up on the rocks.

After leaving the Bat Cave, Noi paddles for about 1 ½ km to the next cave, which is the Oyster Cave. Just like the first one, the name makes it clear what to look out for: oyster shells everywhere on the rocks. A much shorter cave, it leads to another lagoon nothing short of as beautiful as the first one!

Then it is time to return to the boat, and we take off for another island: Ko Hong. This island is much smaller than the first one, and we explore the cave here as well, which exits to the other side of the island, facing another island that looks very similar to James Bond Island – tall and lean. The tide is coming in, but still on the low side, so we find a lot of trash that has been washed up on some higher rocks during the last high tide. Between Noi, Kirk and I we clean out bottles, plastic cups and more from the water and rocks as we can reach it (Noi even climbs up on a ledge to gather much more). Sad, but rewarding, and the only thing we miss out by spending out time cleaning up trash is some beach time – as the rest of the group is swimming and playing in the water between the beach and the boat on the neighboring island.

Before dinner it is time to build our Katong, the traditional offering to the good spirits. Usually prepared in November for the full moon, we get our try today. Noi is a great help to make our offering spectacular – just wait for the photos to see how it lights up!

Dinner is served at sunset – the rain clouds have now disappeared and we get a great view this evening – and while we make our way back to the first island towards the Bat Cave. Once it’s dark, we get back in the canoe and Noi paddles us into the cave, where we get to light the katong, and make a wish!

It’s getting late as we reach the pier again and everyone is looking forward to getting back to the hotel. 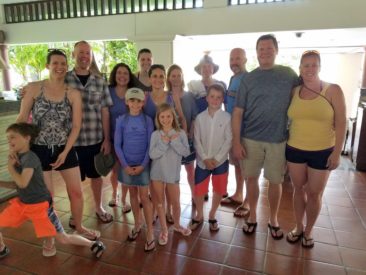 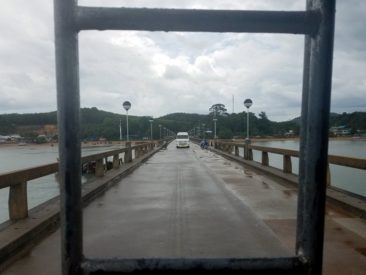 To the dive boat 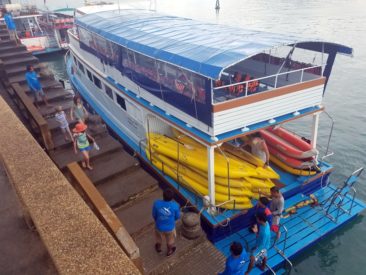 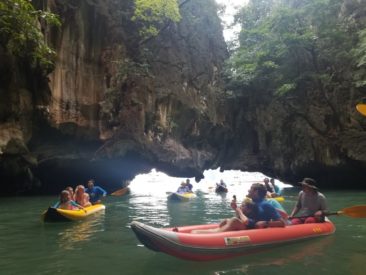 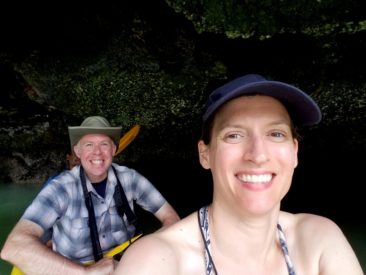 In the sea cave 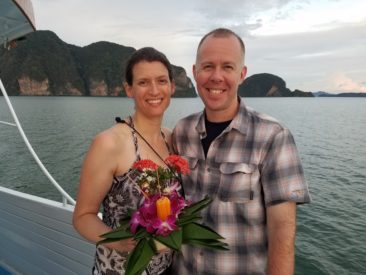 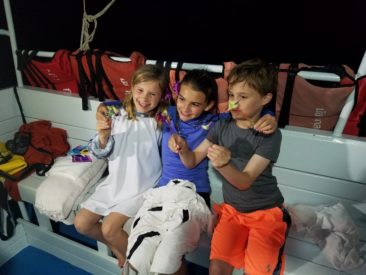 The kids having fun 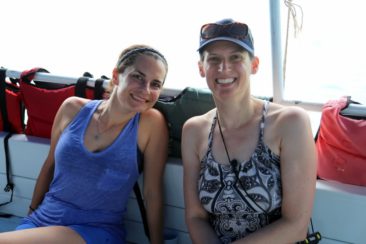 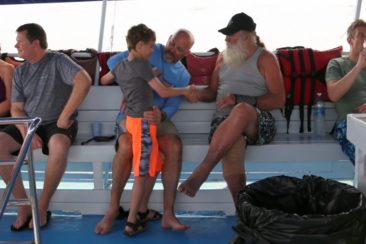 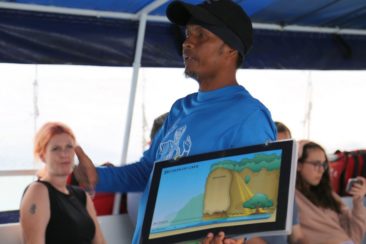 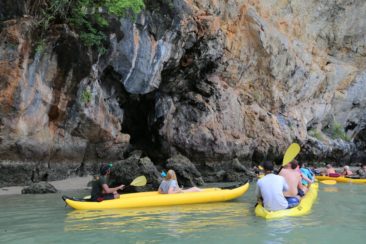 Heading into the caves 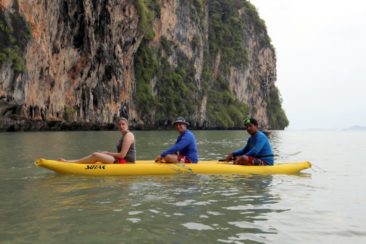 Jessica, Don and their guide 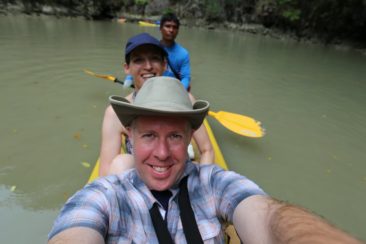 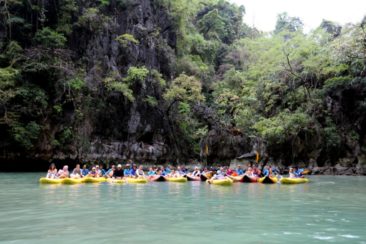 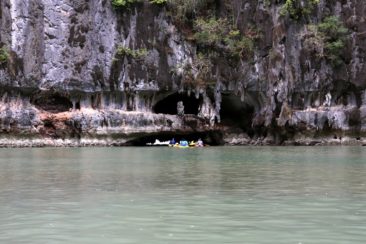 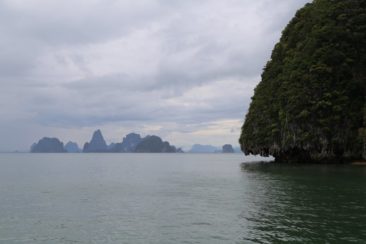 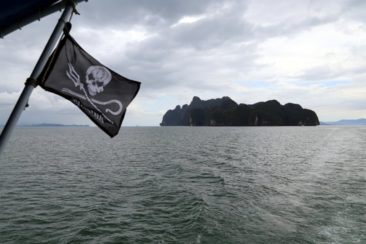 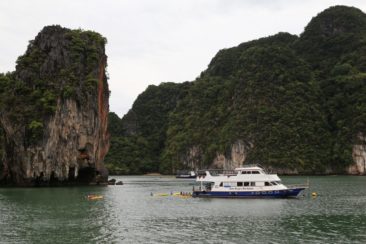 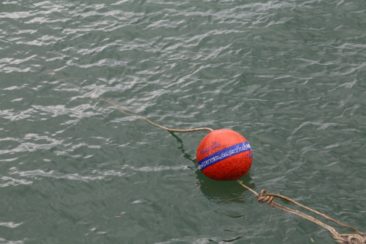 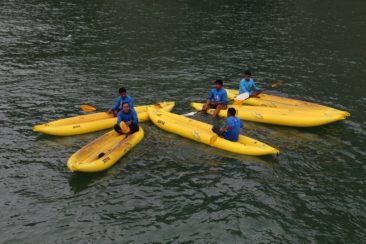 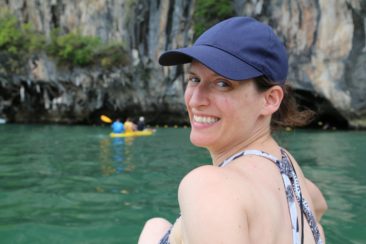 Andi on the canoe tour 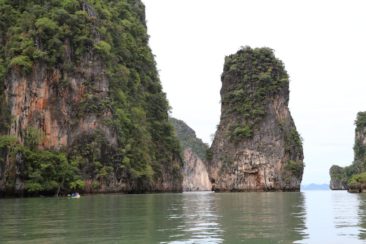 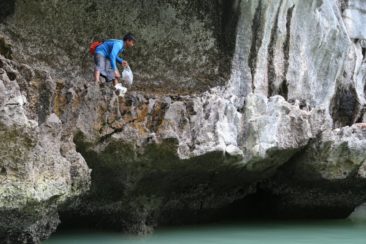 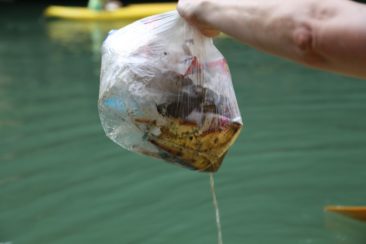 Too bad people leave a mess 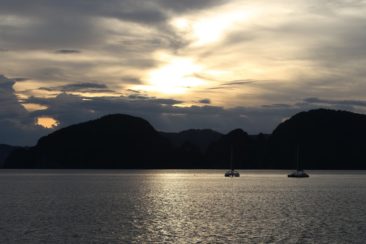 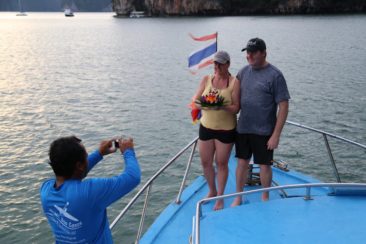 Kim & Doug with their offering 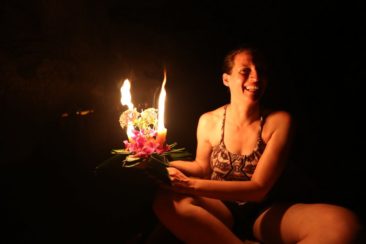 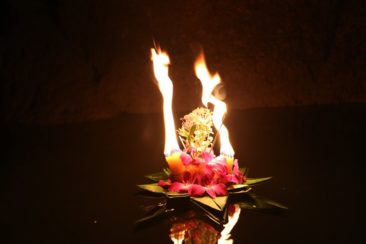 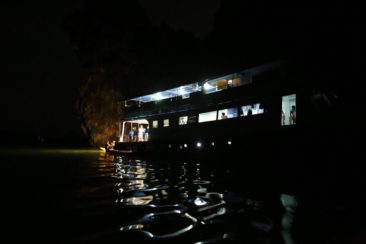